A Civil War Is Brewing In Oregon

A civil war has been brewing over the past three weeks, and the political and cultural warfare will continue to grow more heated in Oregon – and throughout the US. If the tension is not released soon, something might blow, and many innocent people may get hurt. The increasingly tense struggle between Oregon’s working class conservatives who live in the rural logging towns and the progressives who live in the large west-coast cities is not an anomaly in the US; it’s a manifestation of the political and cultural divide present in nearly every State and in the US at large.

Oregon House Bill 2020 – the ‘cap and trade’ bill may be the most drastic global warming bill proposed in the US since the propaganda popularized by Al Gore in 2006. Despite intelligent humans seeing right through the fraudulent claim which was clearly a scam used by politicians to grow their wealth and pass thousands of laws, Oregon Democrats persist in the baseless fight against ‘global warming’.

The bill would dramatically decrease the allowable carbon emissions, and would force people to pay for ‘credits’ that would allow them to emit carbon. The 20-page bill seemingly amends over 30 State laws and states that: “Whereas the potential impacts of climate change and ocean acidification include increasingly devastating wildfires, communities overwhelmed by smoke, drinking water compromised by algal blooms, a rise in sea levels resulting in flooding and the displacement of thousands of coastal businesses and residences, damage to marine ecosystems and food sources, extreme weather events, severe harm to this state’s agriculture, forestry and tourism industries, and an increase in the incidences of infectious diseases, asthma and other human health-related problems…”

The bill seems to create multiple new government agencies, including the ‘Joint Committee on Climate Action’, and the ‘Climate Policy Office’. Among the bill’s goals would be “to achieve a reduction in total regulated emissions levels to at least 80 percent below 1990 emissions levels by 2050”, and “To provide assistance to households, businesses and workers impacted by climate change or climate change policies that allow for the State of Oregon to achieve the greenhouse gas reduction goals set forth in ORS 468A.205.

These cost increases would be passed onto consumers and/or crush the massive logging and trucking industries that rural Oregon relies on. The bill passed in the House but has not yet had a vote in the Senate, because 11 Republican Senators have left the Senate in order to deny the Democrats a quorum, meaning that they can’t even hold a vote on it. The Democrats have condemned the Republicans for representing their constituents, and the governor has commanded the state police to capture the Senators and force them to show up to the Senate. “I am authorizing the State Police to fulfill the Senate Democrats’ request,” Brown said. “It is absolutely unacceptable that the Senate Republicans would turn their backs on their constituents who they are honor-bound to represent here in this building. They need to return and do the jobs they were elected to do.” The Senators believe that they are representing the wishes of their constituents and that such a massive new tax should be put to a ballot measure for voters to decide on. The Senators are seemingly prepared to defend themselves should the state police use force to arrest them and bring them to the capital. Senator Boquist responded to a reporter when asked about the State police coming for him and seeking to use force: “Send bachelors and come heavily armed.” Pro-freedom militia groups such as the 3%ers and the Oath Keepers of Oregon, Idaho, and Nevada have reportedly offered protection to the 11 Republican Senators, who all seem to be refusing to re-enter Oregon until the legislative session ends on June 30th. The Oregon GOP chairman has reportedly received death threats, and Governor Brown ordered the capital to close Saturday, claiming that they were afraid of conservative terrorists.

On June 6th, a Facebook group called ‘#TimberUnity’ formed in order to combat a massive enviro-fascist legislative package proposed by Oregon Democrats and supported by Democratic Governor, Kate Brown. At the time of this writing, the group has over 40,000 members, all of which seem to be active, focused, and furious at the prospect of losing their livelihoods and freedom. (for comparison, governor Kate Brown’s facebook page only has 37,000 likes) This is the type of group whose ‘boring’ political posts could receive 5,000 likes, 850 shares, and 500 comments within 3 hours. I don’t think that I’ve ever seen such an active Facebook group before.

An online poll of Oregonians feelings about the Senators walking out and prohibiting the bill from passing found that 80% of the 3,000 respondents supported the walkout.

Republican Senator Tim Knopp explained in an interview that the bill could increase the cost of gasoline by as much as 22 cents per gallon and it would increase the cost to heat homes by 50%. According to the McMinnville Area Chamber of Commerce, once fully phased in, the bill would would cost Oregon 17,000 jobs and over $6 billion per year.

A Facebook commenter pointed out a few more issues with the proposed law: “The state would auction off allowances (credits) equal to the cap, and companies could then trade, or sell, allowances to ensure they have enough to match their pollution output. For example, a utility could buy more allowances than it needs at auction and then sell the allowances to a manufacturer that actually needs them. You read that right, AUCTION. Meaning that it doesn’t give the smaller companies a chance at all, as the larger companies (especially those who support this) have the money to bid on however many credits they would like.

Along with gasoline, diesel and natural gas producers, companies that may have to purchase allowances include logging and timber companies, cement manufacturers, food dehydrators, steel mills, glass makers, pulp and paper mills, Oregon fisheries and their production lines, and semiconductor makers. More than 100 entities around Oregon produce more than 25,000 metric tons of greenhouse gas each year, according to the state Department of Environmental Quality.”

On Thursday morning, a convoy of loggers, truckers, and concerned citizens made the long trip to the State capital to engage in peaceful but strong protest against the job-killing, anti-freedom, enviro-fascist HB2020. A convoy of protestors was reportedly 20 miles long before arriving at their destination in Salem. Local and national media had no choice but to report on the massive protest which comprised of thousands of furious citizens. Citizens have called her a communist, compared her to feces that must be flushed, and questioned her financial backers (which include George Soros and big pharma, including Oregon’s Medicaid providers).

Why is a New Hampshire publication concerned with partisan bickering in Oregon, a State thousands of miles away? Because it isn’t just ‘partisan bickering’, and because this same battle is being waged in nearly every State in the union. Just like the western, urban areas of Oregon are comprised of progressive, leftist, enviro-fascist Democrats who seem hellbent on invoking ‘global warming’ in their efforts to regulate commerce into poverty, urban politicians in New Hampshire, Texas, Florida, and Ohio are doing the exact same thing. Further complicating the battle for policies based on global warming and socialist laws in general is the federal government’s supreme control over all 50 States in the union. As mentioned above, President Barack Obama used global warming hysteria to justify passing 4,000 new laws that were sold as pro-environment and that were supposed to save us from the Earth’s inevitable warming, ice-melting, and mass human drowning. Thus, the solution to escaping from ever-increasing authoritarian communist rule must first entail severing ties with the politicians in DC. Only then can we even be free to address the crucial reshaping of States. An example of this would entail splitting Oregon down the middle, creating a western Oregon and an eastern Oregon. The two sides’ entire cultures, policies, legislators, and values are thoroughly incompatible. The eastern towns are blue-collar logging towns who reject global warming hysteria and communism. The western cities are snobby communist cities whose people seem to sincerely believe that the world will heat rapidly and melt so much ice that we may all drown before a decade passes. Alternatively, western Oregon could join California or western Washington. Another option would entail eastern Oregon’s rural counties joining Idaho, whose culture seems to match there’s much more closely than western Oregon’s. The county-swapping theory has been considered by a few articles, and does seem to have some historical basis.

The outcome of the current showdown between Oregon’s conservative libertarians and progressive socialists remains to be seen. The Democrats enjoy a perennial majority in the House and Senate, and will likely always control the governorship, so they are unlikely to back down. The session ends after June 30th, so if the Senate cannot assemble a quorum and pass HB2020 before then, the bill would be dead for the year. Governor Brown could always call an ‘emergency legislative session’ in order to pass the bill, and she could likely implement her policies using other methods. The best case scenario still involves Oregonian conservatives fighting for their livelihoods and their freedom next year. Could they do it all over again every year? Being that Democrats grow stronger each day and the American media condemns conservatives with increasing intensity as time goes on, shouldn’t Oregon’s pro-freedom citizens consider severing ties with anti-freedom socialists who seek to destroy the conservative culture and personal liberty?

Republican Senator Baertschiger announced a few hours ago that HB2020 is dead. It will surely be back next year. Its opponents better be ready. 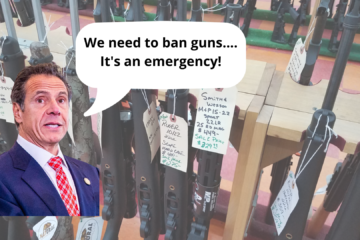 Of course, anti-freedom politicians have been considering whether to declare a ‘state of emergency’ for global warming, gun control, and racism for years. Now that they know that their sheep will allow them to suspend all freedoms in the name of any emergency, they have even more reason to do so.